What a brilliant stadium! I've been to Man U, Newcastle, Liverpool, Tottenham, but no one can compare to this magnificent stadium. Simply a masterpiece of a buildingconstruction! For this game it was nearly a sell out, only a couple of thousands free seats, the seasons highest gate for City so far. It was just a brilliant day out. A norwegian mate of mine, Thomas, came over from Norway and we travelled together with my mate Phil on a glorious sunshine day to Manchester. Finally I could go to a game just enjoying the experience, and not be concerned about the result... We went through the turnstiles over an hour before kick off, and found out we were sat in the sunshine :) Couldn't be better...
Errr, maybe the match could have been better, cause the play the two teams produced was very dull, not much exitement there... But the experience and the day was so much better, so the game didn't ruin a thing for me. The best chance in the game went to the hometeam when they hit the crossbar with a shot from 18 yards out.
I might fancy to come again, cause - again - that was a magnificent stadium!!!
MOM: The sun! :) 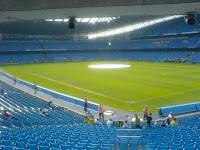 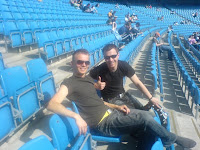 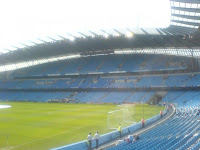 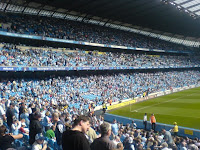 Eirik Fjeld
I am 25 years old and married to Rakel. I'm studying a 3rd semester in religion and ethics at the moment. I might try to get into JMU to study sports development next year. Moved from Kristiansand, Norway to Liverpool, UK in August. Go ROVERS!